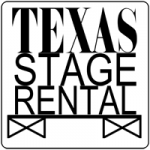 Texas Stage Rental has been providing quality service to the SMU campus for their commencements for over five years.  So, when the staff at Bob Hope Theater needed a stage thrust for an orchestra rehearsal, they called in a vendor they knew they could trust.

The Bob Hope Theater, opened in 1968, and a part of the Meadows School for the Arts at Southern Methodist University, is a beautiful theatrical space.  Texas Stage Rental was charged with building a stage thrust off the existing stage, elevating past the hydraulic stage pit, and extending the stage another 40 feet into audience seating.  Coupled with the fact the seats could not be removed, our technicians also had to account for the graduated slope in the venue.

After several meetings and measurements, design work in CAD, and staff brainstorming sessions, Texas Stage Rental staff loaded in and began our build.  We finished in less time that was originally allotted, and in budget.  The result is a truly amazing temporary structure that worked extremely well for the orchestra that utilized the theater for rehearsal space.

Ask us a question